We have so many treasured and warm memories of Estelle Edwick, DCAS County Team Manager and a fellow archer who died in May.

Estelle’s archery career started in the eighties at Sevenoaks Archery Club (formerly Sennoak) as a junior and progressed to become a member of the Kent Junior archery team. At university Estelle continued to shoot and joined the archery club at Sheffield, Hallam and then moved on to Appleby Bridge, Yorkshire.

In 2002 Estelle moved to Devon and joined Barnstaple Archery Club (BAC). Founded in 1999, at that time there was only three other members. As time moved on, Estelle became very involved in running the Club and took on the role of Chair, with great enthusiasm. This helped the Club to grow and develop into a very successful part of sport within the area around Barnstaple. 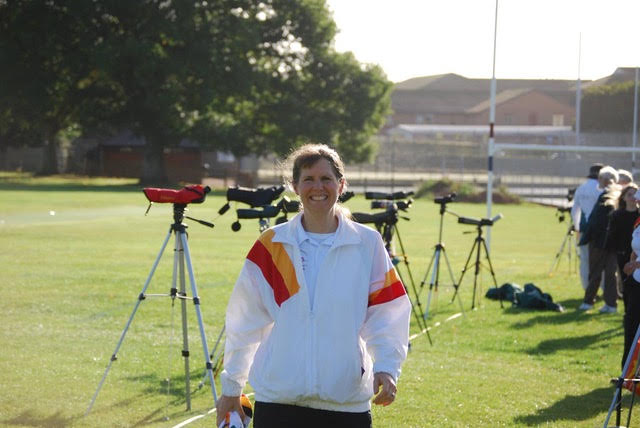 Away from the Club, Estelle became an archer listed in the top ten ladies within the UK. She was asked to be part of the team for the test event of the Commonwealth Games held in India in 2009 which she thoroughly enjoyed although it was a bit on the hot side for her.

Within the Devon & Cornwall Archery Society (DCAS), Estelle became a member of the county team for several years and eventually took on the position of team captain. Following on from this, and with her energies in promoting the training arrangements for the team, the DCAS team won Intercounties event consistently over the last few years. On a more personal level, Estelle encouraged fellow archers to aspire to and achieve more than they often thought possible. In addition to all of this Estelle became Editor of the DCAS county newsletter and also one of the county representatives to the regional body, Great Western Archery Society (GWAS)

Estelle, as well as being an enthusiastic and extremely able archer, was an inspiration to other archers. Especially in the early part of her illness when the sight in her right eye was rapidly failing. This made it seem that she might lose her beloved sport. Typical Estelle, not to be beaten she changed her bow hand and worked her way up to being a top archer,

An excellent coach, Estelle had endless patience with everyone from have-a-go archers at the North Devon Show, to running sessions for children who wouldn’t normally be included in sport at the Devon ability games and to beginner and improver courses within the Club. She was also there to help other coaches improve their coaching skills.

In her working life, Estelle was a continuous Improvement Engineer at the Pall Corporation in Ilfracombe, frequently travelling her skills to other countries on their behalf. She will be missed.

Estelle was foremost someone who properly listened to others at work, as an archer, coach and friend.

Barnstaple Archery Club will, forever, be in Estelle’s debt and sorely feel her loss. The archery world is shocked and heartbroken at the loss of our rare and special lady and extend their love to Estelle’s husband, Dave, and family.